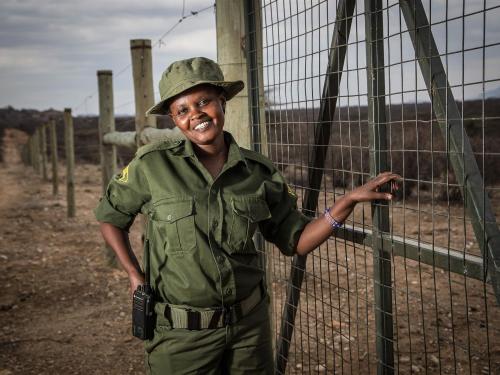 On paper Veronica Loshede’s job, which involves checking all people and vehicles that enter the fenced sanctuary where the rhinos are kept, might sound fairly easy, but, as she explained to me, the day to day trials of her work are very different to the problems most of the rest of us face on an average work day.

“I’m nineteen years old and have been working with Sera for two years. I’m one of the gate keepers for the fenced sanctuary area where the rhinos are kept. I have to keep an eye on all vehicles entering this area. I have to find out who is in the car and why they’re coming in. If it’s someone we’re not expecting then I have to radio the conservancy offices and check that the vehicle is allowed in. We have to be very strict with security because of the rhinos. I also sometimes join the rangers on their patrols around the sanctuary just so that I can check everything is okay. For the moment us women working here aren’t allowed to carry firearms and patrol the conservancy, but there is talk that this might change. It’s my ambition to be a ranger and go on more patrols. I could use a gun to shoot a poacher if I had too.

Sometimes when I’m standing here by the gate animals come along. Elephant, buffalo and rhino. When that happens I run back to the guard house! The biggest problem I have working as a woman on the gate though is that when the [Samburu] warriors come and want to graze their cows inside the sanctuary they don’t want to negotiate with a woman. They try and intimidate us instead and force their way inside. We normally just have to let the warriors in and then the conservancy office contacts all the elders from the villages and ask them to come and negotiate. The elders will threaten to curse the warriors if they don’t leave. It takes a lot of time. First the elders have to find out which family each warrior is from and then they will issue an ultimatum. Either the warriors leave within a week or the elders will curse them so that they die. The warriors always leave!”