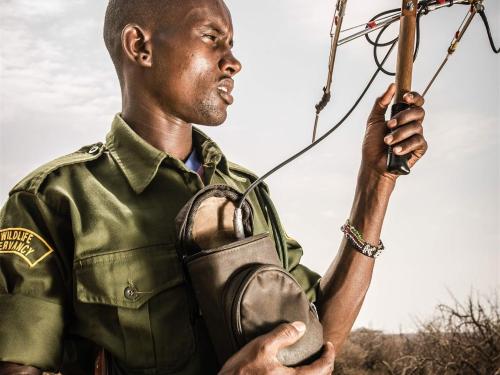 When I first met Thomas Letore he was bounding about the top of some large granite boulders (which in East Africa are known as kopje) waving what looked like an old-fashioned TV antennae around and listening intently to the crackles and beeps that it issued. From this fuzzy confusion he told me he could work out roughly where each rhino was at any given moment.

“I’m from the nearest village to the conservancy and have been working here for just two years. I never went to school and I grew up in the bush. Before starting with Sera I just looked after my livestock taking them to fresh pastures. One day I saw an advert asking for rhino monitors and I decided to apply. The first test was to see how strong and fit all of us applying were so they asked us to run around. I was one of the best runners and so was chosen to be one of the monitors.

Working for the conservancy has changed my opinion on wildlife. Before I only saw livestock as a positive thing. I didn’t care about the wildlife. It was often just a negative, but now I also see wildlife as a positive. Maybe even more so than the livestock. I’ve learnt a lot about wildlife while I have been here and I like having a regular salary at the end of each month. If I ever stopped working for the conservancy my opinion of the wildlife wouldn’t change. Even my family’s attitude to wildlife has changed. If my brothers are out with the livestock and they see something unusual like a dead giraffe or possible poachers then they call me and let me know because all my family now benefits from my working with Sera”.