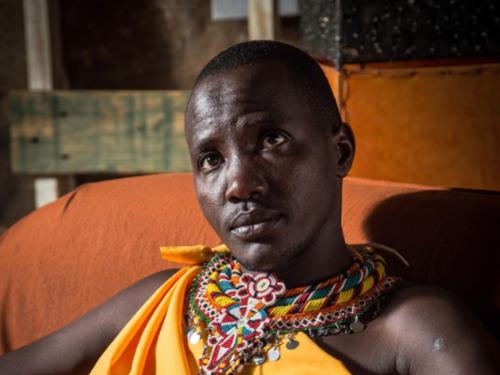 Sammy Lemiruni appears to everywhere all at once. He’ll be walking with you in search of rhinos, organising vehicle pick-ups, checking your dinner is just right and constantly entertaining you with stories. He’s the manager of Saruni Rhino and without Sammy’s ever smiling face it would be hard to imagine how the camp could even function. On one of his rare quiet afternoons I asked him to tell me how he got into guiding and the safari industry and how the rhinos have changed lives in this part of northern Kenya.

“I’m from the Archers Post area, which is right next to Samburu and Buffalo Springs National Reserves. I had a traditional Samburu pastoralist upbringing. We used to move around with our livestock. When I was a child we used to sneak into the parks with our goats. We used to get caught all the time and they’d ‘fine’ us a goat or sheep each time. It was worth it though to keep the livestock fat and healthy because the grass was always much better in the reserve than outside. If we kept ourselves hidden and away from the tourists then the rangers didn’t mind so much. Despite this we saw a positive side from the park. As soon as there are lodges and tourists in an area everyone around makes money off it. I never went to nursery school and then when I did go to school the classroom was just a shady patch under a tree! When I went to high school though there was a wildlife club which I joined. We learnt about the animals and safari tourism and we visited parks like Samburu and Meru. Through this I learnt about conservation and decided that I wanted to be a wildlife guide. I went to college in Nairobi to train as a tour guide. I’ve now been working for five years in the safari industry and with Saruni for just half a year so I’ve been lucky to go straight into being a camp manager. Here at Saruni Rhino because it’s a small, and new, camp. I’m doing a bit of everything. Guiding, which is where my heart is, hosting, managing, driving. It’s a busy job!

In East Africa, Sera is the only place where you can go rhino tracking on foot. It’s one of the great things to do. Like gorilla trekking in Rwanda. It’s one of those things you have to do when you come to East Africa. But also, having the rhino tracking here in this part of northern Kenya will change lives in this area. We’re already seeing that. More tourists are coming to the Sera region and local people are starting to make money off the wildlife. This will change people’s attitudes to the animals and make life easier for them. So, by coming here you will be having an incredible experience and helping people.

I still find it very exciting walking up to the rhinos. When they get close I still think, ‘Oh my goodness. Am I in the right position? Will the rhino charge at my tourists?! I’m constantly thinking about keeping everyone safe. One mistake and the whole thing could shut down. It’s my number one priority. I just want this project to run safely for many years. Sometimes guests want to try and get closer or won’t follow the rules properly and I have to try and stop them from doing this. You can spend your whole life with the rhinos but you can never tell if one day the rhino might go crazy and charge!”