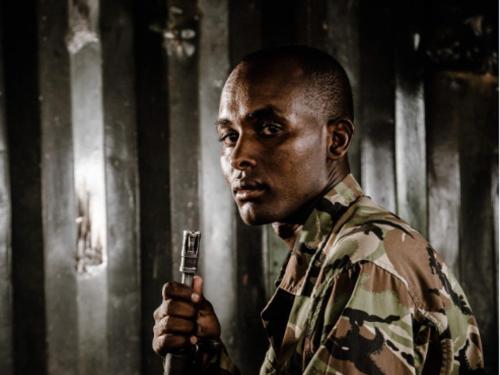 Slamming his machete downwards Richiwa Lolpusike cut, hacked and tore at the dead elephant’s face. Eventually, after nearly an hour of hard work, the tusk came free. Richiwa turned the bloodied tusk around in his hand. It was large and heavy. Maybe 12kg. Once, not so long ago, it would have earnt Richiwa good money on the black market. Today though this elephant poacher turned wildlife protector was merely helping to remove the tusks from a middle aged female elephant which had died of natural causes. The tusks would be put into safe storage and maybe one day go up in flames in one of the ivory burns that are increasingly used as a sign of protest over the ivory trade.

“I’m from the town of Wamba and have been working in security at the conservancy for four years now. The rapid response unit is always on alert. At night we split into small groups and sleep out in the sanctuary, going on anti-poaching patrols and keeping watch on the rhinos and the fences to check nobody tries to get in to the sanctuary. In the daytime we relax more and wait for people to inform us if something is happening. We respond to anything unusual. If strangers are seen in and around the conservancy we go and investigate. If there are any tensions between groups of people we try and sort it out. We’re almost like a community police force. I enjoy everything about my job. My life in the past was very different. I used to be involved in a lot of cattle raids and in poaching and this job has saved me.

I used to be a herder and for four years I was involved in cattle raids. We would steal cows from the Borana people or sometimes the Turkana or Somali. I was involved in about eight big cattle raids. People were hurt and killed. One of my friends was killed during a raid. Whenever we’d launch a raid we knew there was a chance we wouldn’t come back and so I knew this could happen. Before we’d launch a raid we’d go and see certain Samburu families who have the ability to stop another person’s weapons from firing properly. They have the ability to make bad things happen to people. If you said something bad to these people they could make it so an elephant would crush you. We would go and see these families to ask them to ensure that our enemies’ guns didn’t work when we attacked them. I never killed anyone but people did get hurt. I didn’t care though.

I got into poaching after I heard about people making money from ivory. We would get about Ksh100,000 (US$1000) for both elephant tusks. We only poached elephants. We would follow a herd of elephants around here and the Wamba area for days and days until they were in an area where nobody would see or hear us. We only went for the elephants with the biggest ivory. The rest of the herd would often run away but sometimes they would try and kill us. Over the years I killed six elephants. I didn’t care about killing an elephant. It was the same as going on a cattle raid.

Eventually the rangers of all the conservancies around here were looking out for me and trying to catch me. I had to stay away from the villages and hide out in the mountains. Some of my friends went to prison, but I made a deal where I was allowed to come and work with the conservancies in exchange for stopping poaching. Now I make money from the animals without killing them and I appreciate them now. When I look at an elephant now I think it’s beautiful. Since working with Sera I’ve helped catch four poachers. They’re all in prison now. I didn’t feel anything at all when I caught them. It was just a part of my job. Even if I lost my job tomorrow I would never go back to poaching or raiding. What I was doing in the past was very risky and I want to move on now”.