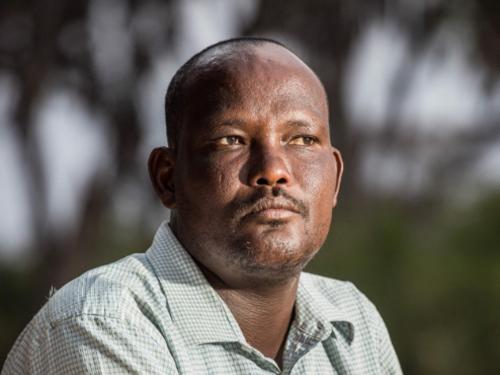 Evening. Just as the last purple, gold tinges of light fade and the first of the nights cicadas start to sing is a magical moment on any safari day. At Saruni Rhino this is the time when guests and guides gather around a blazing camp fire on the dry river bed and toast another great day. On one evening I was joined round the fire by none other than Reuben Lendira, the general manager of the Sera Conservancy and he explained to me how the conservancy and the translocation of rhinos, all came about.

“There were a number of reasons why we wanted to establish this conservancy. One of the prime ones though was to increase security in the area. Cattle raiding by neighbouring people (ethnic groups) has been a big problem here for many years. Secondary reasons, at least at first, were to try and increase employment and to generate money for the local community through tourism.

There used to be a lot of poaching in this area. Elephant, rhino and even giraffe (for meat) were all poached around here. There used to be a lot of rhino living all over this region but the last one was killed about thirty or thirty-five years ago. KWS (Kenya Wildlife Service) was looking for new places to establish rhino populations. When we (community and conservancy leaders) heard about this we applied to KWS for some rhinos. They sent people here to check that the habitat was good and that there was reliable water sources and that the security was good.

We had to hold a lot of meetings with the local community in order to convince them that having rhinos here was a good idea. Most people supported the idea from the start, but some weren’t sure. People were worried about fencing off such a big area of land and they were worried that we wouldn’t allow cattle inside the fenced area (the conservancy does allow cattle to be grazed within the fenced area during periods of drought when the grass elsewhere has died off). The older men in the community were the hardest to convince about the rhinos. They would say, “But why do you want to bring these animals back that used to kill so many of us”! When the rhinos first arrived here though we had a big celebration and everyone from the community came to watch the trucks arrive and look at the rhinos. The children were especially excited to see them.

There have been a couple of bandas (hut like accommodation) here in the conservancy for tourist use since around 2006, but for a long time we got very few visitors. When the rhinos were moved here we started getting more tourists, but it wasn’t until Saruni set up camp here that we really started to make money for the community. In the six months Saruni have been operating here the conservancy has made more money than in the previous ten years combined.

Since the conservancy has been established we have seen an increase in wildlife. And, we’ve also seen less cattle rustling and poaching as well as better security. The number of elephants has risen and cheetah and leopard. There are a very few lions but I think the number is dropping. Our next project is to accurately survey the number of lions in the area and then, eventually, try and re-establish lions here, but this will be hard to do because the local community don’t really like lions. However, I’m confident that one day lions will be back”…