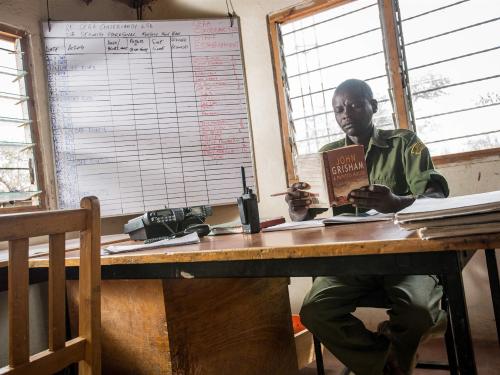 When I first met Peter almost the first thing he asked me was what book I was currently reading. He went on to tell me that he loved to read and indeed from that moment on I hardly saw him without a book in his hand (at the time he was reading John Grisham’s ‘A Painted House’).

“We’re an unusual Samburu family in that I’m one of ten brothers and we all went to school. I don’t have any sisters though and the funny thing is my older brother has ten daughters and no sons! None of us were ever really herders though we do have camels and goats, but someone else looks after them. All my other brothers are now teachers or doctors. My father knew that education was important. He never went to school, but he became a policeman and is now a paramount chief. He taught himself to read and now he reads books all the time. I myself studied English at school and specialised in Shakespeare. My favourite Shakespeare books are Romeo and Juliet and Hamlet. It’s not that easy to get books out here but I have friends who bring me books when they come and my brother, who lives nearby, has over a thousand books so I also borrow them from him. One day I hope to write a book of my own all about Samburu culture and traditions, but it’s a lot of work writing a book and I don’t have much time.

My first job after school was at Lewa as a radio operator. Around sixty people applied for the job and many of them had degrees and diplomas but I’d only completed high school. I didn’t think I would get the job, but they found I had a talent as a radio operator and I spoke better English than most of the others so I got the job. I worked at Lewa for eight years and by the time I finished there I was the senior radio operator. Lewa is the headquarters for the NRT so it was a busy job being the radio operator there as you have to deal with all the different NRT conservancies. I decided to come and work at Sera just nine months ago because this is my home area and I wanted to be closer to my village and family. My job here is to receive and record all the information on where each rhino is and what they’re doing and then transfer that information to the headquarters in Lewa.

I remember the early community meetings when the arrival of rhinos was first discussed. It was very hard to get all the people to agree to it as a lot of people thought that a conservancy was just a way for the white man to take our land. Once the land was fenced off the herders came with their cows to try and get into the fenced area. They were just testing to see if it was really still their land. They were allowed into the area and that has made them realise that it’s still they’re land and now most people agree that the rhinos and conservancy is a good thing.

My job keeps me busy at the conservancy offices but I sometimes get the time to go and see the rhinos. My favourites are the ones that came from Lewa because I used to see them a lot when I worked there so I feel like I know them. My favourite is Loitemu as I’ve seen him since he was first born and he’s not at all aggressive. I think the rhinos will mean many more tourists will come up here. Walking with the rhinos is really something unique that you cannot do anywhere else in Kenya”.