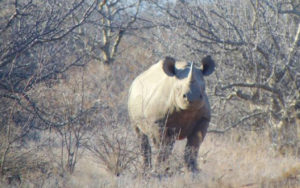 NTANGASWA
Name meaning: ‘The first calf to be born in Sera’

The first rhino born in Sera, Ntangaswa is the daughter of Naitamany (father unknown), but although she was born in Sera it’s thought she might have been conceived in Lewa before her mother was translocated to Sera. For the moment she’s always with Naitamany learning the ways of the world. She’s now nearly fully grown, but yet she’s still developing her character and for the moment tries to keep in her mother’s shadow when being tracked, which can make her hard to see. It’s very likely that she will leave her mother’s side in the last half of 2018 and start to live independently. She doesn’t yet have a tracking chip in her nose or a tracking ID number.