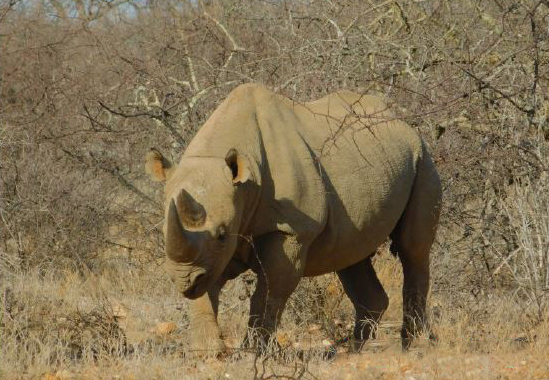 LODUNGU
Name meaning: ‘A cross-savannah Migrant’ in Maa. (For a male – not to be confused with the same name in feminine form for ID #11 – Nadungu) in Maa

‘Cedric’ is a rhino with real character. Most Sera rangers regard him with an equal sense of awe and fear. One of the largest, and certainly most dominant, of the Sera males, Cedric is incredibly curious and often aggressive. Somewhat suspicious by nature he will almost always launch a mock charge at anything out of the ordinary that he hears, senses or smells. This makes him one of the most exciting rhinos to track on foot, but also the riskiest (although he almost always launches a mock charge when he realises people are around he always veers away at the last moment) and so most times if another rhino is in the vicinity rangers will lead visitors to the other one instead.

Cedric is a bit of a ladies man; if he’s seen with other rhinos it’s normally with the females Nadungu (ID #11), Nariku Sera (ID #1) or Napanu (ID #16). Cedric was involved in a serious fight with Loicharu (ID #7). The attack left Loicharu seriously injured.