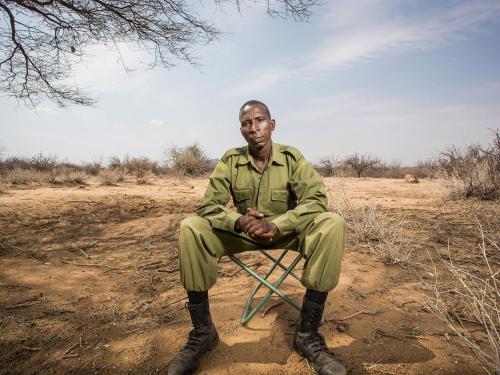 It was Julius who first led me on foot to one of Sera’s black rhinos. We’d crept through the dense thorn thickets, him as light-footed as a ghost, me as light footed as a drunk giant, to within ten metres or so of a hulking, stroppy bad tempered rhino. When the rhino got wind of our approach it spun around, ears spinning like radar and stared us down. My heart virtually stopped but Julius remained calm and collected. After approaching so many rhinos on foot this was all in a day’s work to him.

“There are sixteen of us working in the rhino monitoring group and between us we have two tracking devices [each rhino has a tracking chip implanted in its horn which allows rangers to follow the animal’s movements] and we work in two teams. Every morning we get up very early and locate the rhinos using the tracking technology. The machines though only work from about 6am to 10am and 4-6pm. This is done in order to preserve the battery life of the microchip transmitters inserted into the rhino horn. Even so, each battery only lasts about two years. The other reason we turn the tracking system off in the middle of the day is to stop any poachers from hacking in and tracking the rhinos themselves. Once we’ve got a rough location of each rhino using the tracking device we set out on foot and look for them in order to check with our own eyes that each rhino is okay. If we find all the rhinos in the morning then we don’t have to bother looking for then in the afternoon.

The tracking devices are very useful because we can use them to check that the rhinos are still moving about. If we saw that a rhino hadn’t moved for two days then we would know to go and check it out. And, if we can’t find a rhino for a week, then a helicopter or plane will be sent by the Northern Rangelands Trust to help us find it.

I started work with the Sera Conservancy as a security guard in 2005. When the conservancy started to look for rhino monitors I was one of those chosen. Myself and the other monitors were taken to Lewa Downs (the home of the Northern Rangelands Trust and one of the most internationally acclaimed conservancies) for 3 weeks in order to learn how to track, monitor and approach rhinos on foot. Rhinos were poached out of the Sera region many years ago, so before going to Lewa I’d never seen a live rhino before. I was very nervous the first time I walked with a rhino, but within a week I’d got used to it and started to enjoy the experience.

When the rhinos first arrived in Sera they were very nervous and shy. They had come from areas with a different climate and vegetation and at first they spent almost all their time hidden in dense bush. This made them very hard to find and when we did find them they would charge at us straight away. Nowadays the rhinos are much calmer and don’t charge. Or not as much anyway!

My favourite rhino is Loitemu (rhino #8). He’s very relaxed and doesn’t run away when he sees people. He’s from Lewa and most of the Lewa rhinos are more relaxed than those from Nakuru, because at Lewa they were used to seeing people on foot whereas the rhinos from Nakuru were only used to vehicles not people”.