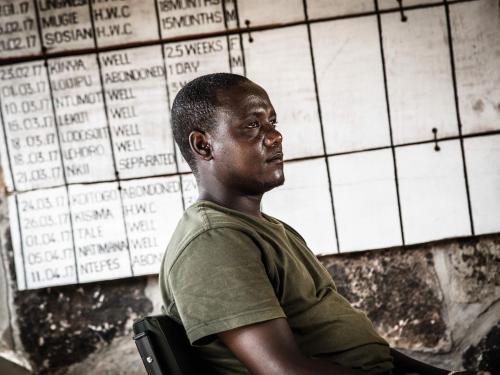 In early 2017 the Sera Conservancy buzzed with good news. A baby black rhino had been born. This was only the second to be born in Sera since the rhinos arrived. Sadly though the excitement was short-lived. The mother abandoned the baby on the first day. Conservancy rangers were left with no choice but to transfer the baby to the nearby Reteti Elephant Sanctuary where experts would try and rear the baby before re-releasing him back into the wild. Today, a half-day trip Reteti to watch the baby orphaned elephants being fed and to meet the rhino calf is almost a compulsory side-trip for anyone staying at Saruni Rhino. It was during my visit that I met Joseph Lolngojine, a vet at the centre, who told me all about how the centre came about and how it is to work with cute baby elephants and rhinos.

“I started my career as a vet treating domestic animals; goats, cows and so on. It was a bit of a jump moving onto treating orphaned and injured elephants and rhinos at this sanctuary although having said that many of the illnesses are pretty much the same for all mammals – even humans.

The sanctuary was actually started by the local community here. They were concerned about the number of orphaned elephants that were being found here. The only place they could go was the Sheldrick Trust in Nairobi and from there they would be released into the Tsavo area in the south of Kenya. We felt that this was having a negative impact because we should be rearing, treating and re-releasing northern elephants here in their home area where they even have the chance of finding and perhaps joining their family herd again. The sanctuary is overseen by the NRT and largely funded by Conservation International [a number of other groups are also funding the sanctuary].

We mainly rescue elephants here but we have a single baby rhino which came from Sera Conservancy. He’s six months old now, but the mother abandoned it on the first day. This is the second time she has done this and it’s quite common in black rhinos. This is the first rhino we’ve reared here. He drinks about sixteen litres of milk a day. We basically give him human baby formula with a few other things added to it to beef it up a bit. He’s quite playful though this playfulness can come across as aggression if you don’t know him. He doesn’t particularly like the baby elephants and they don’t mix, but he does have his favourite keepers. He won’t even come out of his sleeping quarters in the morning if it’s not one of his favourite keepers getting him. We hope to re-release him back into the sanctuary in early 2018, but only if he’s big and strong enough”.