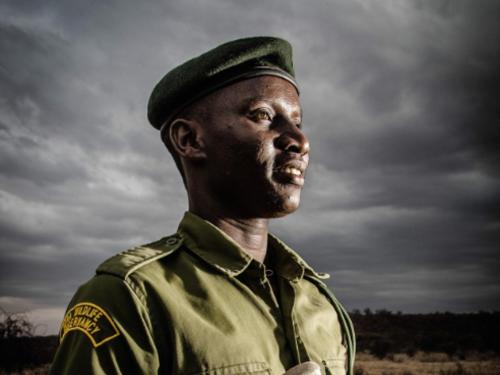 One hot, still afternoon I’d walked for an hour or so, up and down rocky slopes and through jagged acacia thorn bushes tracking a rhino. Normally we found the rhinos within twenty minutes or so of starting to walk, but this time it felt as if the rhino was playing with us, making us sweat for the pleasure of its company. When the sighting did come it was up close and very thrilling as the rhino quite suddenly appeared from behind a bush right in-front of us. Afterwards, as we walked in the setting sun back to the jeep I got talking to Jimmy Lekiondo, one of my guides for the day, about what the conservancy brought the people of Sera and what the future holds for pastoralist people in northern Kenya.

“My job is essentially to guard the rhinos from poaching. Every day is a bit different so the job is very varied. Every day we patrol around the conservancy and try and talk to lots of people in the area to try and get a feel for what’s going on. So far we’ve never had any poaching incidents with the rhinos. We also like to tell the local community why it’s good that we have these rhinos. We explain that the [presence of] the rhinos has created a lot of jobs in the area and some of the children receive money from conservancy funds to go to college.

My salary helps support six or seven other people. It pays for my wife and children and also pays the school fees of my brothers and sisters. This is normal for people who work here. Before I started working here I’d never seen a rhinoceros in real life. I’d only ever seen pictures of them. The first time I had to walk up to one I had a lot of fear. I was sent to Lewa to train and I learnt how to approach the rhinos there.

Before the conservancy was established the animals living around here were very shy and used to run away as soon as they saw a person. Today, now that they’re protected, the animals are friendlier. Especially the elephants. The leopards though, they still take our goats.