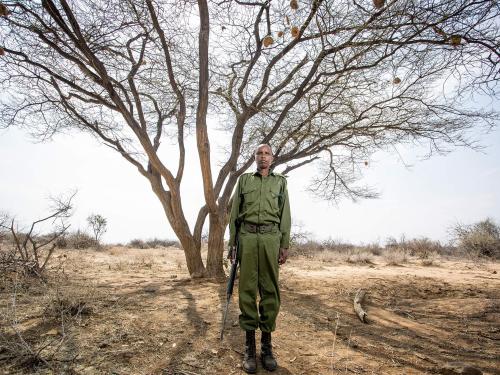 Clutching his Kalishnikov rifle and looking sharp in his dark green Sera Conservancy military fatigues, Ambrose Lengironi, who works in the security department of Sera Conservancy, told me how he has been a part of the Sera team for fifteen years. For most of that time he patrolled throughout the conservancy’s sprawling 345,000 hectares of dry thorn scrub and his long experience meant that when rhinos first arrived here he was chosen as one of the elite rhino security guards charged with keeping a 24/7 eye on these most precious of creatures.

“Every day we do a patrol of the conservancy. We’re just checking that everything is okay. We look to see if there are any dead animals [of any sort]. And if we see a lot of human footprints then we will investigate. We count the animals we find and radio the office when we find something. For example, if we find elephants we will tell the office where they were so they can mark it down.

The security units link up with the local communities to find out what’s happening all over the area and not just within the conservancy. I’ve never had any problems with people killing animals within the conservancy, but outside the conservancy it happens. One time we got an alarm call form the local community saying an elephant had been shot outside the conservancy. When we got there the elephant was already dead, but the poachers hadn’t yet had time to pull out the ivory. When they saw us there was an exchange of gunfire between us and the poachers. Unfortunately, it was a very rocky area with a lot of trees and the poachers managed to escape so we never found out who they were. We have very tight security around the rhinos and I’m confident that the rhinos are safe. But you never know, poachers might try and come so we’re always alert for them.

A lot of children here like conservation and wildlife and would like to work with the conservancies. I have five children, the oldest is thirteen and the youngest is two years old, and I would like them to work in the conservancy, but they are still young and in school, so maybe they will do something different”.