Benson’s Guide to the Galaxy

“This is absolutely breath-taking” I uttered, as I sat down on the beanbag while looking at the night sky in awe. “Thank you” I heard Benson say as he came closer, his laser pointer in hand, ready for the stargazing session. He said this in all honesty, as if the dark universe was his creation, his own personal stage. And for the next moments, he would indeed be the caring professor of the firmament.

By day, Benson is the assistant manager at Saruni Samburu. At night however, he turns into an astronomy aficionado, looking forward to sharing his knowledge and beliefs of the cosmos with the guests.

Benson was introduced to astronomy at an early age when elders in his village would tell him stories and myths about the black yonder and its origin.

The San people, the oldest inhabitants of Southern Africa, believed that a beautiful young girl scooped up a handful of ashes and scattered them in the sky, creating the milky way and thus helping the people to find their route home at night.

The Samburu and Masai share similar beliefs. An upside-down crescent moon means war is coming but that they will be defeated. Turn the crescent moon around and it is believed that the community will experience happiness and good health.

It was with the help of one of Saruni Samburu’s previous manager Johan, that Benson expanded and deepened this knowledge of the stars, constellations, and galaxies. He would listen to Johan almost every night for eight months, like a studious and passionate scholar avid to absorb all the proficiency and wisdom of his teacher. 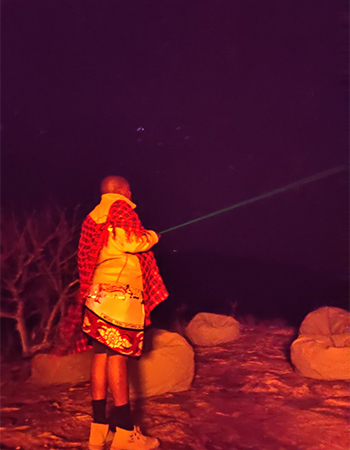 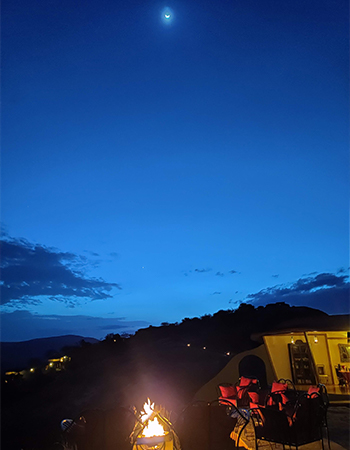 When asked about his favourite constellation, Benson has no doubt: “Orion”. It is told that a correlation exists between the three stars of Orion’s belt and the position of the pyramids of Giza. This is Benson’s favourite power fact to grab the guests’ attention and it works every single time.

It does not come as a surprise that his favourite myth involves the great huntsman as well. There are countless stories about the Orion constellation, the one he likes the most however involves Cassiopeia, a queen who considered herself to be the most beautiful woman.

Outlawed from her castle for endlessly boasting about her unmatched beauty, she took refuge among the stars, with the purpose of displaying her beauty to every man. Orion immediately fell in love with her, but she would only give herself up to him if he gave her the gift of Lupus the hare.

Armed with his bow and accompanied by his two loyal dogs Canis major and Canis minor, he set off for the catch of Lupus. But the hare was clever and hopped over the Eridanus River, making it impossible for Orion and his dogs to catch him. Orion therefore never got hold of the gift that would have in return given him the greatest present of his life.

Benson goes on telling stories and explaining the beautiful waltz of the stars. Mother Earth has now become very silent and very small. For a while, we are just star dust.